GETTING A FACE FULL OF SMOKE? 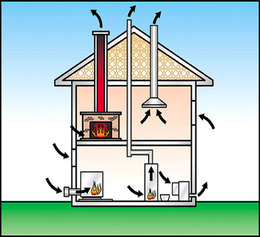 Fireplaces, wood stoves, and inserts sometimes experience back drafting. This is generally blamed on the wind or the chimney not being high enough. To really solve the problem, first it has to be correctly defined.

If smoke or fumes come out of the fireplace, or the fire is difficult to light because of cold air coming down the chimney, in most cases, it’s because the house is at a lower pressure than outside and air is being sucked into the house via the chimney. The problem can be worse when it’s windy so generally, the wind gets the blame. There is a name for this phenomena: Stack Effect.

WHY DOES STACK EFFECT OCCUR

Stack Effect occurs because the house is acting as a better chimney than the chimney. All of the air within the house is warmer and more buoyant than the air outside and therefore wants to rise. If there is an opening in the uppermost part of the house then the warm air will find it and leak outwards. This creates a powerful draw in the lower part of the home pulling cold air in through the easiest opening: the chimney.

HOW TO STOP STACK EFFECT

The areas that leak in the uppermost parts of the house are the attic access hatch, ceiling light fixtures, and poorly fitting windows. Each of these areas can be reworked to stop the air leaks. By doing this it will not only reduce the Stack Effect but your heating bills will also be reduced. What cannot be changed are the various exhaust fans that blow air out of the house. These can create a Stack Effect which can only be corrected by adding air to the house to balance the air that is being blown out. The cure to Stack Effect is therefore a combination of adding adequate ventilation air and sealing the leaks in the uppermost areas of the house. Sealing air leaks only in the basement can aggravate the situation.

Remember, for every cubic foot of air that leaves a house a cubic foot of air must be brought in to replace it. Plusaire will handle the ventilation and combustion air, and the other measures can be easily corrected by the homeowner.